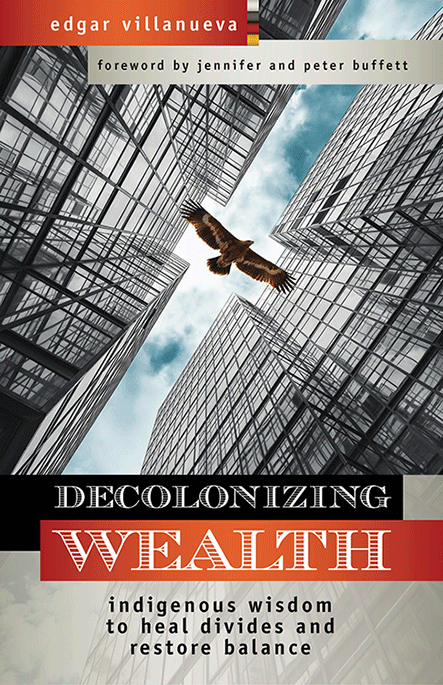 Posted at 19:16h in books by Ingrid Srinath
At a gathering of Native Americans in the Cheyenne River territory, described in Edgar Villanueva’s book, Dana Arviso, Executive Director of the Potlatch Fund, recounts a discussion about poverty reduction strategies: “They told me they don’t have a word for poverty. The closest thing that they had as an explanation for poverty was ‘to be without family.’ They were saying it was a foreign concept to them that someone could be just so isolated and so without any sort of a safety net or a family or a sense of kinship that they would be suffering from poverty.”
As we contemplate the news reports each day, reporting the very opposite of that worldview, bystanders filming lynchings and neighbours’ deaths being discovered only due to the smell emanating from their apartments, the notion of philanthropy the book defines, not as the largesse or altruism of wealthy people, but embodied in the indigenous notion of money and other resources as medicine, is both radical and restorative.
The Lumbee tribe of Native Americans in North Carolina, of which Edgar Villanueva is an enrolled member, were among the first to encounter white colonists. His individual experience of deeply internalised values of colonialism, combined with his experience as a grant-maker in philanthropic foundations built on fortunes extracted through slave labour in the tobacco industry among others, informs the unique perspective of this book. The trajectory of his career and the book’s structure, retrace metaphorically, the journey from being stolen and sold, to arriving at the plantation, being a house slave, a field hand and an overseer before achieving liberation, encountering the familiar syndrome and symptoms of internalised oppression.
Unlike some recent critiques of US philanthropy, Decolonizing Wealth seeks to go beyond both, censorious rhetoric and economic arguments, to advocate for ‘healing’, replacing a ‘colonized’ culture based on values of division, control and exploitation to a ‘decolonized’ one founded on connection, relatedness and belonging. It also examines the spectrum of capital from loans to gifts encompassing venture capital, impact investing and municipal bonds besides traditional philanthropic grant-making. Villanueva’s 7 step healing process — grief, apology, listening, relating, representation, investment and repair — offers tangible ways in which philanthropic organisations and the communities they seek to serve can effect transformational change.
Despite the book’s often salving tone (Oprah Winfrey is referenced more than once), it does not shy away from confronting hard truths, of poverty being the ‘product of public policy and theft, facilitated by white supremacy’ for instance, or calling out the shallowness of many ‘diversity’ initiatives. Its recommendations too, are sharply focused. On representation, for example, it affirms that “effectively moving money to where the hurt is the worst — using money as medicine — requires funders to have deep, authentic knowledge of the issues and communities that will be putting the funding to use.” And that such knowledge can only come from living inside that community and experiencing that issue for oneself. Equally, with regard to investment of foundation endowments, the 95% that is not granted but instead often invested in the very industries that cause the harms philanthropy seeks to remedy, the book advocates moving beyond timid tokenism and ‘do no harm’ approaches to embracing truly mission-driven strategies. As the book quotes the F B Heron Foundation: “A foundation should be more than a private investment company that uses its excess cash flow for charitable purposes.”
Decolonizing Wealth challenges us all to examine our own life choices and their impact on our communities and our planet. After all, it’s not so long ago that, notwithstanding the oppression and exploitation of the caste system and the patriarchy, many of our communities resembled the one Dana Arviso describes. And Vasudhaiva Kutumbakam, the Sanskrit phrase found in Hindu texts, which means “the world is one family” describes a worldview identical to the indigenous Mitakuye Oyasin, or “all my relations” that Edgar Villanueva’s book is based upon.
​