Posted at 06:11h in Blog by csipadmin 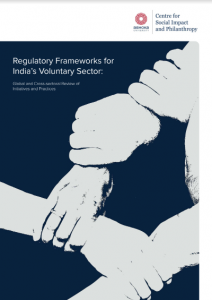 This report explores regulatory frameworks and practices, and recommends a ‘sector-led’ approach to regulating India’s voluntary sector. This approach conceptually overlaps with self-regulation and self- regulatory bodies, which are discussed in the literature on the sector. The two are similar because in each case, the sector takes the lead in improving standards. However, they differ in the level of engagement with the government and other stakeholders. The study discusses the strengths of a sector-led approach in increasing public confidence, reducing the regulatory burden, and ensuring autonomy and high standards of professionalism.

The case for a sector-led approach is made by reviewing self-regulatory (SR) initiatives and self-regulatory organisations (SROs) in the Charity sectors of three countries and other sectors in India. More specifically a review of initiatives in the charities sectors of UK, Australia, and the Philippines, and India’s Microfinance, Advertising and Journalism sectors, was conducted. These were selected for the strengths and variety of their self-regulatory initiatives as well as relevance of the contexts to the case of the Indian voluntary sector. As part of the study, a detailed secondary document review of policies, acts and laws, and government and non-government reports was undertaken. Primary data was collected through interviews with civil society leaders from India and abroad, and from experts on self-regulatory initiatives and frameworks. Overall, the study recommends the need for government- recognised, multiple sector-led initiatives for regulating the voluntary sector in India.

The report consists of seven sections. The introduction describes the importance of sector-led initiatives in introducing accountability standards, and in administering and supporting the voluntary sector. Section 1 articulates the rationale and research methodology followed for conducting the study. Section 2 aims to provide an overview of the five key models of self-regulation adopted globally: cooperative, delegated, devolved, facilitative, and tacit. It also provides examples from self-regulatory organisations examined in this study, i.e. UK Charity Commissioner for England and Wales, Fundraising Regulator for England, Wales and Northern Ireland, Australia Charities and Nonprofit Commission (ACNC), The Philippines Council for NGO Certification (PCNC), The Caucus of Development NGO Network, M-FIN and Sa-Dhan (Microfinance), Advertising Standards Council of India, Press Council of India (PCI), and News Broadcasting Standards Authority (NBSA). Section 3 briefly discusses some sector-led initiatives that have been attempted in India’s voluntary sector and analyses why these efforts failed to have wide-scale impact including reasons such as low rates of membership and lack of enforcement mechanisms. Section 4 documents key research findings from our analysis of self-regulatory initiatives backed with illustrative examples. Section 5 enumerates the key recommendations set out below and the report concludes with some proposed next steps to move the discussion forward in the Way Forward.