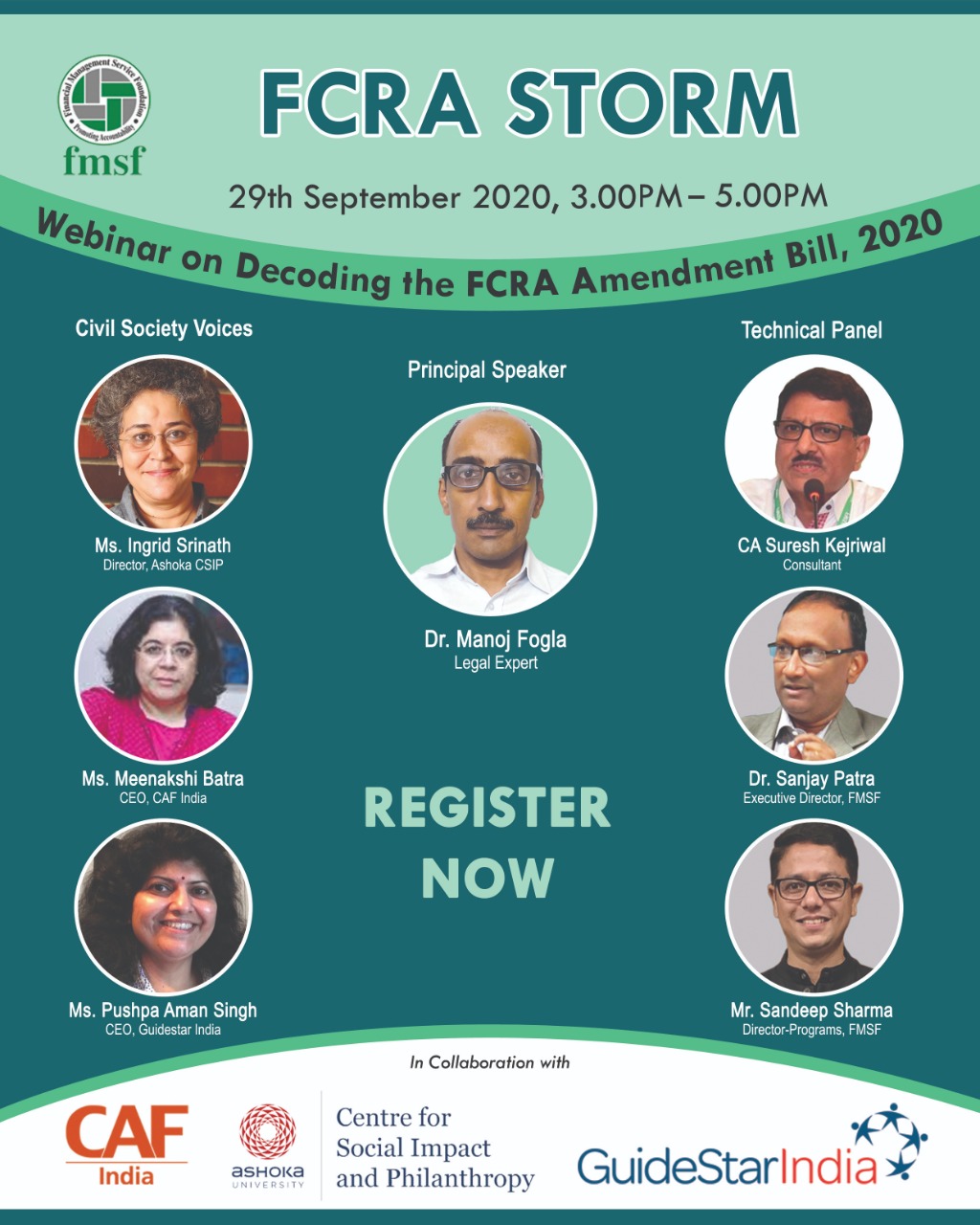 How the Proposed FCRA Amendments Hurt India’s Development and Democracy

Posted on September 22, in Uncategorized by Ingrid Srinath

Updated October 6, 2020 — The FCRA 2020 amendments have been signed into law, effective September 29. The Centre for Social Impact and Philanthropy will continue working with our partners to provide information on the implications of this legislation on India’s funders, NGOS, and communities. Check back for updates, follow us on social media (@AshokaCSIP), and sign up for our newsletter to learn more.

The Lok Sabha has passed a series of amendments to India’s Foreign Contribution Regulation Act, with minimal debate. More nuanced discussion, in a select committee for instance, would have thrown light on their potential hazards to development and democracy.

The amendments provoking the greatest concerns are

Across the spectrum, sources of social impact funds — Corporate Social Responsibility contributions, government and private philanthropy — are already projected to decline sharply in response to the economic impacts of the coronavirus pandemic. Recent research by the Centre for Social Impact and Philanthropy (CSIP) has highlighted the negative impact on NGO finances, employment, and programs that looms large over the social sector and those it serves; experts project a “lost decade” towards India’s progress on achieving the Sustainable Development Goals, with 100 million people thrust back into poverty they had just escaped. Reports of alarming increases in school dropout rates, child labour and child marriages, and declining rates of immunisation, access to education and healthcare for people with disabilities are multiplying.

One of the few positive outcomes of the pandemic was the creation of new alliances and coalitions among social sector organisations and with the business sector, which enabled relief efforts to achieve scale at an unprecedented pace, reaching underserved communities across the country with urgent and critical aid. The proposed ban on regranting funds received under the FCRA disincentivises, possibly even prevents, such coordinated action — when collaboration has proven to be the most effective way to ensure that relief, rehabilitation and the rebuilding of lives and livelihoods can happen at the scale and pace necessary. (It’s important to note that the existing law already ensured that foreign funds could only be re-granted to organisations that were also cleared to receive such funds.)

For international funders without a local presence in India, intermediary organisations enabled their funding to reach smaller, less visible organisations by providing due diligence in the selection, monitoring and capacity building of grassroots NGOs.

The ban on regranting, by raising transaction costs, will force these funders to focus on supporting only a few large organisations, further disadvantaging smaller, more rural, grassroots groups and those working with the most marginalised communities and issues.

It will also hamper giving from India’s diaspora — the most generous in the world — whose members rely on intermediary organisations to help identify NGOs they can support and to provide them with reports on their impact.

The proposed cap of 20% on overhead expenses, which might seem well-intentioned, appears to be based on a misunderstanding of the range of activities engaged in by civil society organisations.

Expenses at think tanks, research institutions, and NGOs providing capacity building and support services to the social sector are mostly accounted for what are termed ‘overheads’. Consequently, these organisations will be adversely affected by this provision.

At other types of organisations, this move will curtail not just staffing but investments in training, technology, innovation, impact measurement and the like.

Though the government has provided no evidence of misuse of FCRA funds by NGOs, the moves to ban regranting and the requirement to channel all funds through the State Bank of India, Delhi, seem aimed at making the task of monitoring funds flows easier by transferring the burden from regulatory bodies and law enforcement agencies to non-profits.

Given that FCRA inflows are less than 5% of foreign direct investment, this new banking requirement raises questions as to how other funds flows are tracked across the banking system.

Many NGOs already report a hostile banking environment with bottlenecks and delays resulting from banks’ limited understanding of FCRA requirements. These amendments will most likely exacerbate these constraints.

The requirement to provide Aadhaar details could dissuade people from joining NGO staff and boards, depriving the sector of their knowledge, skills and networks and preventing these individuals from contributing to the sector’s work.

Again, it begs the question why the social sector is singled out for this additional burden. Once again, the “Ease of Doing Good” in India clearly appears not to enjoy any of the favour that “Ease of Doing Business” attracts.

The relationship between government and civil society in India has been marked by mistrust and hostility for over a decade.

Civil society’s stellar response to Covid-19 and the appreciation it garnered from key officials and Prime Minister Narendra Modi seemed to augur some possibility of rebuilding that relationship. These FCRA amendments, rushed through Parliament, erode any chances of rapprochement at a time when collaboration has never been more necessary, whether in ensuring last mile delivery of services and entitlements, or in ensuring voices at the margins are heard in policy discourse.

Most critically, these amendments come at a time when India’s global rankings on democratic freedoms are in sharp decline. They will undoubtedly have a deeply chilling effect on dissent and the freedoms of expression, assembly and association, all guaranteed by India’s Constitution and international treaties.

The amendments merit serious reconsideration. All those who wish India well must seek their immediate withdrawal.