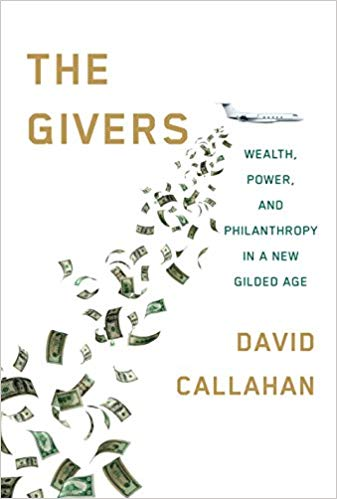 The Givers: Wealth, Power, and Philanthropy in a New Gilded Age — by David Callahan

Posted on April 30, in Books by Ingrid Srinath
Share

What are the consequences of surging philanthropic resources and ambition in a context of falling public spending and growing disenchantment of citizens with representative democracy? David Callahan’s book, The Givers, posits an answer to that question in the US context, but it is a question that could, and should, be asked more widely.

The Givers provides a sweeping panorama of the world of US philanthropy, particularly the relatively new giving emanating from the worlds of technology and finance. Impelled by a multitude of factors – gratitude, a sense of responsibility, acknowledgement of the role luck has played in their success, parental example, a need for personal fulfilment, avoiding the perils of inherited wealth, social norms, empathy especially from those whose own origins were relatively modest, a desire to express one’s values or, simply, the need to optimise one’s tax bill – the largest pool of accumulated wealth in human history is fundamentally altering not just the realm of philanthropy but the political landscape as well.

Combine ‘hyperagency’ – the confidence that accompanies great wealth, especially wealth acquired through solving wicked or vast problems, a trait many new philanthropists share — with ‘Helpers High’, the emotional and psychological rush that charitable giving, volunteering and related activities provide — and you have a quest for catalytic, systemic, game-changing ‘big bets’ — the philanthropic equivalent of tech unicorns. This trend is increasingly apparent in India too. Recent conversations with both grant-makers and NGOs suggests that it is easier to gain access to, and support from, Indian philanthropists for big, novel ideas than for incremental change and proven models.

As Callahan points out, it’s not just that there is so much new philanthropic money but that it’s so impatient, as entrepreneurs turn billionaires at much younger ages than in previous generations, and seek to give while living rather than endow foundations that will last in perpetuity. Asked recently about succession planning ta his operating foundation, a major Indian philanthropist responded that he didn’t care what transpired after he was gone. He would focus all his resources on what could be accomplished during his lifetime, leaving others the task of taking up the challenge when he has left the scene.

The resulting ‘super-citizens’ are bringing the logic of disruption that was the formula for their success in business to their philanthropy, converting wealth into power by deploying millions of dollars as well as armies of experts and advocates behind their causes of choice. From education, the most contested philanthropic battleground, to bankrolling political movements, and the dark money funding climate change denial, Islamophobia etc., philanthropy now offers the promise of a shortcut, bypassing political oversight and democratic accountability, what Paul Ylvisaker, a former Ford Foundation executive Callahan quotes, called “society’s passing gear.” In India, and other emerging economies, new wealth is still timid about taking on ‘political’ issues, putting its credence instead into building models that government will take to scale.

In bypassing conventional politics and the communities they seek to serve, these models of change are typified by philanthropist Herb Sandler’s perspective that the author quotes: “It’s all about betting big on the right people working the right leverage points with the right ideas”. Consider ventures of this type, even those of significant scale, e.g. Teach for America or KIPP in the US, with the catalysts for systemic change that have been successful throughout human history — social movements that unite masses of people who are unhappy with a current system and set out to transform it, via processes that effect sustainable change over time through the collective efforts of many different stakeholders working towards a shared goal e.g. in a US context, the movements for civil rights and women’s rights, or against teen pregnancy or smoking, or the Tea Party and Black Lives Matter. The Indian experience with the grassroots movements that built political will for the rights to education, information, work and food emphasise this.

Alexis de Tocqueville famously praised civil society as a conduit for myriad people’s voices. The Givers concedes that, while that remains so, there’s no denying the role of top philanthropists in shaping just which of those voices speak most loudly. This finger on the scale is largely invisible as the media fail to scrutinise philanthropy with any degree of rigour. In fact, it too is increasingly owned and controlled by, and amplifies, the same few voices.

While some US philanthropies do seek to support and amplify subaltern voices, including notably, the Open Society Foundations or the Atlantic Philanthropies, Callahan reminds us that even in these cases it is still powerful, wealthy players determining which voices speak most loudly. While defenders of big philanthropy’s role in policy advocacy claim that their activities merely expand the pool of ideas available to policy makers, the simultaneous decimation of people’s collectives such as trades unions results in policy debates that increasingly resemble “gods throwing lightning bolts at each other”. Since most of these think-tanks, research studies, advocacy campaigns and ‘astro-turf’ movements are funded via tax-exempt funds from wealthy donors, all US taxpayers are, in effect, subsidising the efforts of the wealthy to influence public policy. In India, until recently, activity of this kind was largely either funded by communities themselves or by international donors. As constraints on foreign sources have grown, many advocates for human rights, marginalised communities and environmental causes have had to scale back, repackage or abandon their efforts.

The Givers also offers sharp insights into the personalities and preferences of a wide range of big givers. Joe Gebbia, co-founder Airbnb describes his motivation for giving as: “I want to dedicate my resources to bring the moment of instantiation, when someone who has an idea sees it become real, to as many people as I can.’ George Kaiser’s is succinct: “Make Tulsa the best city for children to be born, grow and succeed”. Bill Ackman believes that: “In 20 minutes, (after due diligence by his staff) I can decide. I meet the entrepreneurs; I make a judgement about the business plan.”

I wish Callahan had elaborated further the reform agenda he outlines, including greater transparency, a narrower definition of charity for tax deductibility, introducing a mandatory payout rate for DAFs and raising the mandatory payout rate for foundations. One cannot argue against stronger accountability for philanthropy, or against a call for more inclusive or even representative governance. Expanded regulatory oversight as the cure might, however, be deeply counter-productive in countries where governments are hostile to dissent, minorities, and democratic rights and freedoms more generally. Callahan calls for new research on the benefits and efficiency of charitable giving funded by a earmarked fund paid for from the 2% federal excise tax paid by private foundations for oversight. Most countries would benefit from his recommendation for an independent Office of Charitable Affairs for oversight, to orchestrate partnerships with govt, and to help non-profits start up. His advocacy for greater voice for citizens, a stronger public sector and greater taxation might not receive as warm a response in countries like India where both business and elites lean towards privatisation and a smaller role for the public sector.

For countries like India, that lack adequate platforms and networks for policy debate and collaboration, have yet to develop norms for accountability and transparency, and who face growing inequality and polarisation, the book is an invitation to urgently address those gaps to pre-empt a future that could be extremely hazardous to democracies already facing significant threats.

About Ashoka University: Ashoka University is a private, nonprofit university. An unprecedented example of collective public philanthropy in India, it is a pioneer in its focus on the Liberal Arts. The University offers undergraduate and postgraduate programmes across the humanities, social sciences and fundamental natural sciences. The aim is to help students become well rounded individuals who are able to think critically about issues from multiple perspectives, communicate effectively and go on to become ethical self-aware leaders with a commitment to public service. Ashoka has built collaborations with University of Pennsylvania, University of Michigan, Carleton College, King’s College London, Sciences Po, UC Berkeley, Trinity College Dublin and Yale University among others. To learn more about Ashoka University visit http://ashoka.edu.in

About the Role: Centre for Social Impact and Philanthropy is looking for an Assistant Manager – Convening,  to build and strengthen networks among its key constituents and to ensure the widest dissemination of its research and knowledge products. The candidate should have the flexibility to work on multiple projects, display a natural aptitude for partnering with different organisations, planning events and a demonstrated expertise in external communications.

Location: Based in, or with travel to, Sonipat 3-4 days a week, currently work from home.

To Apply: Click here and upload the following documents:

Only shortlisted candidates will be contacted.

Report on Tax Incentives for Philanthropic Giving: A Study of Twelve Countries

Policy Brief on Tax Incentives for Philanthropic Giving: A Study of Twelve Countries

CSIP and NFI (National Foundation for India) are collaborating to convene a diverse set of non-profit organisations across India to seek convergence among them, amplify the views and concerns of India’s voluntary sector in policy discourse, create a space for intra and cross sector dialogue and collaboration, and exemplify the norms of governance the collective espouses.

CSIP and NFI is looking for a Convening Consultant to assist in advancing the convening of a collective of Indian non-profit organisations through convenings, focused group discussions, webinars, etc. S/he will work closely with CSIP’s and NFI’s internal teams and partner organisations to help build the collective  and will be responsible for supporting outreach initiatives to include a wide range of non-profit organisations as active participants. The ideal candidate will have a good understanding of the Indian voluntary sector and the ability to facilitate convenings – online and offline.

To apply: Please click here to upload your resume and state why you are interested in this role.

Deadline: We will be interviewing on a rolling basis until we find a suitable candidate. Early applications will be preferred.

Location: The office of CSIP is based out of Ashoka University Campus in Sonipat. But as of now, the position is expected to work on a remote basis. The role might require frequent travel to partner and workshop locations.

About the Role: Centre for Social Impact and Philanthropy is looking for an Assistant Manager – Communications, to strengthen content and design across its website, social media and publications, thereby playing a vital role in brand building and knowledge management. The candidate should have flexibility to work on multiple projects with various team members. The candidate should also have the ability to assess effectiveness of communications through data and analytics.

To Apply: Please click here and upload the following documents

Location: Based in, or with travel to, Sonipat 1-2 days a week. Currently work from home.

Note: Only shortlisted candidates will be contacted.