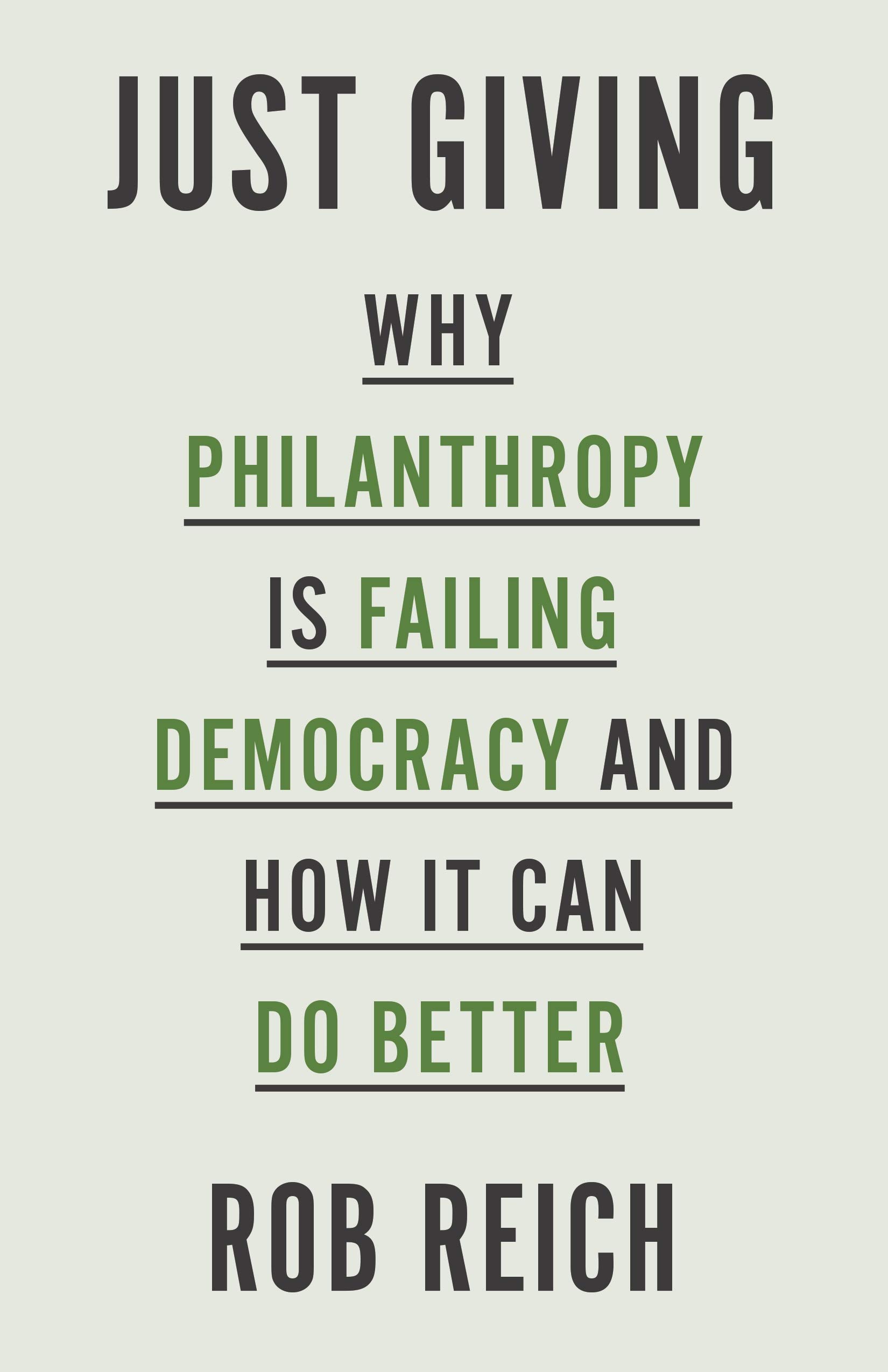 Just Giving: Why Philanthropy Is Failing Democracy and How It Can Do Better — by Rob Reich

Just Giving: Why Philanthropy Is Failing Democracy and How It Can Do Better, by Rob Reich. Princeton University Press, Princeton, New Jersey, USA, 2018, ISBN 9780691184395

Just Giving, by Stanford University professor Rob Reich, is a fascinating book for students of political philosophy and for thoughtful foundation leaders. It takes on fundamentally important questions: what is the role of philanthropy, both individual and organized philanthropy, in a liberal democratic society? And what role should it play? Reich goes a step further in his questioning to ask: “Given the ubiquity and universality of philanthropy, what attitude should a state have toward the preference of people to give money away for some prosocial or public purpose?” (p. 195).

These are questions that, as Reich notes, political philosophy as a discipline has little addressed. In his view, to answer them requires the development of a “political theory of philanthropy.”  This is what he has set out to accomplish in this relatively brief and accessible book, which grew out of discussions at Stanford’s Center on Philanthropy and Civil Society, where Reich is a co-director. By a political theory of philanthropy, Reich means a theory about the purposes and justifications for the state providing a subsidy to the private act of giving money away. Hence, much of the book focuses on describing, analyzing, and evaluating various purposes for a liberal democratic state to provide incentives in the form of tax subsidies and legal rules that shape foundations, specifically perpetual endowments. Most of Reich’s references are to US public policies and practices, but he suggests, and I agree, that his analysis is relevant in any liberal democratic society that subsidizes and regulates giving.

Reich begins with a historical perspective on the various ways in which states have structured private philanthropic activity. As he points out, states have long taken an interest in the role of giving in their societies.  Philanthropy can be understood not just a private and individual act but indeed an “artifact of the state” (p. 20).  In classical Greece, traditional Islamic society and 18th and 19th century Europe, to cite Reich’s three examples, philanthropic organizations existed in relation to political institutions which both promoted and contained them. This is not just a phenomenon of our day, even if major philanthropists in the US such as Rockefeller, Carnegie, and now Gates and Buffett compel public attention because of the sheer magnitude of their philanthropy.

In subsequent chapters, Reich turns to contemporary institutional arrangements that shape philanthropy, especially in the US, and discusses possible rationales for state engagement with private giving, including the creation of more equality, efficiency of resource distribution, and contribution to pluralism of thought and action.  Ultimately Reich dismisses these arguments as insufficient rationales for the state to permit and enable private philanthropy.  In doing so, he thoroughly reviews the current critique of modern philanthropy.

In a chapter on philanthropy and equality, Reich attacks the notion that philanthropy is justified at least in part because of its redistributive aims (p. 68). In Reich’s view, “philanthropy sits uneasily with an egalitarian norm. . . it is not often a friend of equality, can be indifferent to equality, and can even be a cause of inequality” (p. 69).  With data on tax incentives and giving patterns in the US, Reich demonstrates that tax incentives disproportionately advantage the wealthy, and that the distribution of charitable giving does not favour the neediest. Nearly one-third of all charitable giving in the US supports religion, which often goes not to the poor but to the sustenance of religious groups for facilities and operating costs.

He cites a major 2007 study from the Center on Philanthropy at Indiana University, which concluded that, at most, one-third of charity is directed to providing for the needs of the poor (p. 87). Even if one narrows the lens to private foundation giving, analyses suggest that foundations are at best “modestly redistributive,” with a good deal of their funding going to education and health (p. 92). This pattern also holds true in Canada, where education and health are the top categories for grants distribution by dollars, and where many of the grant recipients are universities and large health charities and hospitals.  Education and health may be indirect means to more equality depending on whether philanthropic money is used for financial aid or for programs directed at low-income patients. But the first objective of most education and health charities is not creating more equality.

If the justification for philanthropy is not for its redistributive contribution, then what is the justification for continued state subsidy? In a liberal democratic state, Reich notes, the protection of individual rights and liberties is paramount, and the liberty of individuals to give to whom they choose is one of those liberties. But why should the state go further and subsidize that liberty? Reich dissects two grounds on which such an incentive could be necessary: because philanthropy produces social goods more efficiently than the state could alone, and because it contributes to a more vigorously pluralistic society.  Reich does find some merit in these two arguments, although not enough to justify what he considers to be a highly plutocratic bias in the tax subsidy and a lack of targeting in the granting of the status that gives access to the incentive (tax-receipting status).

In the most important part of his book, Reich makes his own case for the existence of private foundations in a liberal democracy, but only if these foundations operate in roles that neither state nor market are likely to undertake, namely “discovery” and “intergenerational justice.” Just Giving in effect is a book-length essay arguing for an intervention by the liberal democratic state in the practice of foundation philanthropy, to require foundations through subsidy and regulation to take an “experimentalist, long-time horizon approach to policy innovation” and to contribute to “the project of promoting and securing justice across generations” (p.197). Both roles depend on the specific characteristics of an endowed perpetual foundation: its longer time horizon and its ability to take risks because it is not accountable in a short-term way to either shareholders or voters. Reich argues that foundations are crucial organizations to counter the effects of “presentism,” or “democracy’s systematic and pervasive bias in favour of the present” (p. 161). Presentism is one of democracy’s major liabilities.

There is no doubt that, as the world faces increasingly complex and massively transformative shocks such as climate change, with all the disruption that a warming planet will bring, the need both for innovative policy and for an intergenerational justice perspective has become pressing. If foundations can contribute uniquely to these needs, this is a compelling justification for their existence and for state subsidy of that existence.  Reich describes private foundations as democratic society’s “risk capital” (p.159). Because of their institutional design, they could use their resources to “fund higher risk social policy experiments and identify potential social problems decades away or innovations whose success might be apparent only after a longer time horizon”(p. 165). In his view, foundations can and should do “what democratic governments routinely fail to do: think long” (p.193). Reich acknowledges both critics and even allies of foundations who have ruefully noted that one does not often see courageous risk-taking or a willingness to be social pioneers. He knows that this distinct role can be played best by staffed and professionally managed foundations. Regrettably,  even larger foundations neglect to equip themselves properly for a legitimizing role.

In his final chapter, Reich elaborates on the role of philanthropy in time, as a contributor over the long term to building the associations and structures of civil society that generate social capital and maintain just institutions. This is one form of assuring intergenerational justice, essentially through building the capacity of civil society organizations to endure. Another way is to fund the development of precautionary strategies and technologies aimed at protecting future generations from regressing. The problem of climate change is obviously the most pressing in that it presents catastrophic implications for the lives of future generations, which may be reduced in part by investments in mitigating strategies today.

Reich is not a policy thinker.  His strong suit is theoretical argument. While he offers policy solutions in the form of regulation of disbursements to ensure that private foundations in exchange for their tax advantages do indeed focus on innovation and intergenerational justice, he offers little in the way of policy analysis or pragmatic assessment of how such regulations could be brought about.  Nevertheless, his political theory of philanthropy is persuasive and would be a good starting point for any private foundation strategy session. Reich doesn’t offer many examples of US foundations that are playing the legitimate and legitimizing role that he proposes. But we can think of several Canadian foundations who are pursuing the goals of innovation and intergenerational justice: McConnell, Chagnon, Metcalf, Ivey, Max Bell, Muttart, and many others. Canada is fortunate to have a private foundation sector that does indeed take the long view in our democracy.

Hilary Pearson is the former president of Philanthropic Foundations Canada, a pan-Canadian network for organized philanthropy, based in Montreal.

This book review was first published on The Philanthropist.