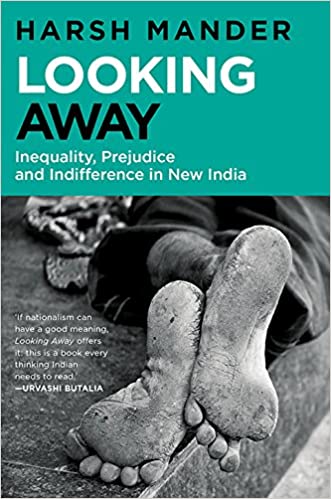 03 May Looking Away: Inequality, Prejudice, and Indifference in New India — by Harsh Mander

Haunted by maligned spirits of zombie-ridden capitalism, howls of Greyhound grow louder, bites of canine nastier, and dreams of a more just and humane society mauled under the debris of greed, ambition and lust. As the war between living and death breaks out, the strong, rich and powerful scavenge off the poor, weak and hungry.

This is not a scene lifted from post-apocalyptic Hollywood flick Mad Max. They are real-life vignettes about the “many exiles of India’s poor” in Harsh Mander’s novella-like non-fiction, Looking Away. Like a gadfly from Greek mythology, the ‘compassionate pragmatist’ or former ‘comrade collector’ torments middle-class conscience and dissects our heartless soul without any damage to blood vessels. I am sure you are wondering how you still survived this cathartic surgery. Because, he lovingly pours sweet, liberal balms of forgiveness into the self-inflicted festering wounds of rising “inequality, prejudice and indifference”. That’s why Mander’s larger project of “locating a just and caring state in a just and caring society” lies uncertainly between success and failure!

Sort of a sequel to the chilling account of hunger in Ash in the Belly, Mander has gone frontal in exposing the evil consequences of the malignant malware called tyranny “of the 1 per cent, by the 1 per cent, and for the 1 per cent” in India and elsewhere.

Inequality distorts and corrupts society, but in a hierarchical and caste-ridden society like India, inequality is a catastrophic horror. And this is the reason why India continues to remain what Babasaheb Ambedkar described as a “multi-storeyed tower with no staircase and no entrance. Everyone has to die in the storey they were born into”.

Replete with sensitivity, sarcasm, corrosive guilt and ring-fenced with molten anger that is visually textured and lyrically expressed, Looking Away offers a panoptic view of the violence of the rich and powerful against the poor and minorities.

Using personal letters, travelogues, first-person accounts, Dalit poetry, scholarly references and reminiscences from academic seminars, Mander tells stories of discrimination and atrocities of wealth with such mellifluous voice and virtuosity that your humanity is bound to be awakened. From the Sen-Bhagwati debate, BPL controversy, untouchability, manual scavenging, malnutrition, labour reforms, farmers’ suicides, slum dwellers, street children, homeless destitute, exclusion of Dalits, pauperisation of tribals, competitive conversion, religious riots (including the 1984 anti-Sikh riots) to tabooed subjects like bonded labour, domestic helps, rapes and profiling of so-called terrorists, Mander weaves a blistering, beguiling tale of post-1991 India in the feeble light of Faiz Ahmed Faiz’s iconic poem, Yeh Daag Daag Ujala. It is this daag (stain) that will stay with you forever if you care to read the book.

Though neo-liberal cheerleaders happily daydream about Simon Smith Kuznets’ seductive inverted curves, and the dismal science of marginal productivity could unethically justify the increasing list of fat and pompous billionaires and plutocrats, Mander is rightly furious at the ‘franchise entertainment’ spectacle of inequality and intolerance.

Evoking the richly-layered, but contested legacies of Mahatma Gandhi, Jawaharlal Nehru and Ambedkar, with tinges of Raj Kapoor’s romantic socialism, Mander has transcended the growth-centric view of development into a radical, post-democratic utopia of humane and caring civilisation.

Given the narcissistic fantasies of so-called aspirational India, a large majority of the middle classes truly deserve whip-lashing and soul searching. But it is also a misnomer that the current generation of youth is becoming Nietzschean ‘Last Man’—an apathetic creature with no great passion or commitment. In contrast, young Indians are more liberal, secular and believers in gender equality and justice for all than the privileged elite of yesteryears. A lunatic fringe, though, continues to threaten. In short, equality is now deeply entrenched in the minds and hearts of most Indians, yet the battle against equity is unfinished.

In other words, one would expect that the continuing aristocracy of the old world and the neo-elite’s near monopoly over social privileges through the aesthetically charming but snobby doors of the Bombay Gymkhana, Cricket Club of India, India International Centre, India Habitat Centre, etc, would have caused shame in the hearts of the progressive and liberals. It is this paradox that lends a sublime Chaplinesque touch to the book.

Mander’s faith in the central role of the state in guaranteeing pro-poor development rights is unblemished. But his conceptualisation of the state is highly problematic. We know he is acutely aware that if unregulated by the active politics of citizens, a social welfare state degenerates into a dystopia of oppression and wasteland.

Thus, his liberal faith in the state as a neutral arbiter between conflicting interests and a guarantor of individual rights is not supported by historical or sociological analysis of the nature of the state. State is not only ‘the coldest of all cold monsters’, but also an agent of class power and patriarchy. And this obscures his otherwise sensitive analysis of the Nirbhaya gangrape. “Explosive stresses of under-class masculinities and the violence and hopelessness with which impoverished young men live” do recognise your and our culpability in the increasing incidents of gender violence, yet these do not absolve the state and patriarchy of their crime. In short, state and society jointly conduct, supervise and normalise maiming, raping and slaughtering of their own children and insurgent citizens.

It is true that Mander has not written a Thomas Piketty kind of monumental academic tomb on ‘inequality’, or Akhil Gupta’s almost macabre account of genocidal violence of ‘normalised poverty’ in Red Tape. Still, combining his activist experiences with loyal-to-life anecdotal footage, the book has the potential to turn Mander into a much sought after, new-age ‘guru of public compassion’. For instance, the chapter The Imperative for Public Compassion offers slice-of-life stories of Grosmaires, Maganlal, Yusuf, Shaid and Ashok in Baran district of eastern Rajasthan in the politics of caring.

Thus, read this book as an almanac on the power of compassion in the Sunday Mass prayer. And you won’t be surprised why Rousseau wrote, “men would have never been better than monsters, had not nature bestowed on them a sense of compassion, to aid their reason” in Dissertation on the Origin and Foundation of The Inequality of Mankind in 1754.

Mander is perhaps the only public intellectual in India who has stirred our imagination on the significance of forgiveness in sublimating collective and individual cases of what Immanuel Kant referred to as ‘radical evil’. Using the argument of what he calls ‘egalitarian compassion’, he provocatively explores the “possibility of love, empathy, and public compassion, being fashioned out into instruments of social and political resistance, justice and, indeed, social transformation”.

But it also opens the Pandora’s Box of ‘charity paradox’ because compassion is a dual-platform phenomenon with regard to equality; it expresses the common humanity of the benefactor and also inflicts feelings of condescension and shame. And I am also not sure how he intends to resolve the so-called Derridian aporia that unconditional or absolute forgiving must involve the impossible, that is the forgiving of an ‘unforgivable transgression’.

Notwithstanding the philosophical, political and juridical challenges, his plea for ‘closure’ and ‘healing’ can lead to what Hannah Arendt famously called ‘natality’—an unprecedented beginning. In the end, even if you disagree and are peeved at the savagery of Mander’s nightmarish prose, your heart won’t starve in his ‘republic of pluralism and love’!

Originally published in the Financial Express

Hindi
Download the State of the Support Ecosystem Report